Even during lockdown, writing remains a constant strength of our school. Throughout this school closure, we have continued to see our pupils rise to the challenges of different writing genres and produce engaging pieces. It is evident pupils are focusing on the audience and the purpose of their writing.

Please find below some examples of writing from Year 5 and 6. We hope you read them and include some of their ideas in your writing (we love to share at Wembley Primary) or inspire you to write pieces of your own.

Zara (6S), wrote an emotive newspaper report, based on the story of the missing child 'Alma'. Zara used advanced vocabulary choices and grammatical structures, plus ensured she used all the features of a newspaper report.

Aarush (5S) rewrote his version for a part of the poem 'The Highway Man'. He copied the original author's (Alfred Noyes) unique style of repetition: riding, riding, riding. The language he used to describe the setting and the mood for his piece was remarkable, and he managed to keep the period of the book by using archaic language.

We are incredibly proud of these two pupils. We will continue to post examples of WOW writing throughout the course of the lockdown to keep you entertained.

For now, enjoy these two pieces.

Friday 22nd January, 2020
L.O: To write a narrative in the style of an author

The Highwayman by Aarush 5S

Far in the moonlit road, Bess could see a silhouette growing taller and taller as it approached the old inn door. Her heart thumped hard and her face turned pale. Tears gushed down her eyes like wild waterfalls. As the clattering sound became crystal clear, Bess prayed silently in the darkness, “Oh lord, please let my love save me from these monstrous men.”

Under the blanket of stars, the highwayman came riding, riding, riding but he stopped in the middle of the silky road. He took his trusted pistol and fired it, pointed towards the sky, to signal his arrival. He said not a word but charged like a mad bull.

Bess heard the firing of the muskets under the moonlight. A cold thought engulfed her. Her blood stopped for a second, “Is my love dead?”

The door opened slowly and in the darkness the muskets stopped firing. A tall figure appeared.
“THOU HATH COME TO SAVE ME. MY LOVE!” announced Bess. A sweet smile blossomed on Bess’s face.

The two love birds hummed a pleasant melody under the moonlit night and galloped away in the darkness. 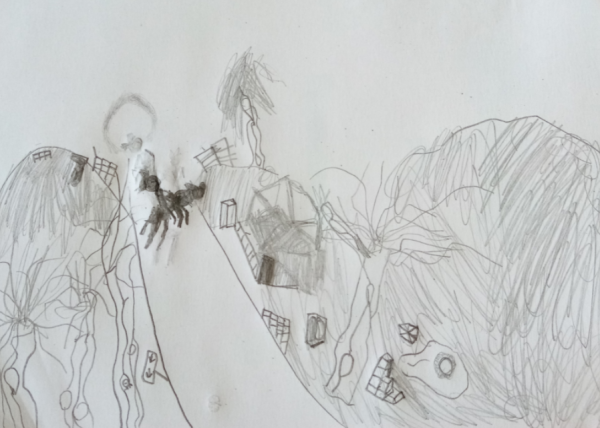 WHERE IS THE GIRL?

The parents of an eight-year-old girl, who suspiciously vanished yesterday morning, fear she may have been abducted from the streets of Paris.

Alma had been sent on a journey to deliver muffins to her grandmother, Mary Croissant, at precisely 12:34; the sweet treats were a gift in return for her granny’s help. Alma’s mother (Jula Croissant) expected her to be home by 13:00. However, when Alma did not return, her parents retraced her steps before calling the police. They had questioned the local shops’ managers on the path she should have taken to see Grandma. When all the locals answered no, cameras were checked by her parents and it was true, she had not taken this path, ‘the only path’ to her grandmother’s. This meant she had gone through the abandoned lane of Saint Cobbles Avenue. On hearing this the parents immediately contacted the police. “Our family is devastated and anxious.” sobbed Jula Croissant, “We just don't know where Alma could be now. Mr and Mrs Croissant went on to plead with the public for any information about Alma, which could help the police find the innocent eight-year-old.

Mrs Barkley, the local street sweeper and the ice polisher, is reported to have been the last person to see Alama: “As I was using my salt machine, Big Bertha, I noticed a young girl skipping along these shady alleyways of St. Cobbles Avenue. She was writing her name on the wall opposite that weird shop. I wondered why on earth a little girl was here but I had to finish salting the streets and ploughing the snow. It looked like she was trying to get inside. When I put my head back up to get the salt, she was gone.” Mrs Barkley then informed the “Daily Paris Telegraph” that when she turned to reach for her salt , the young girl had disappeared.

Assisted by sniffer dogs, the Parisian police force have been combing the streets, searching all night for the young girl. Police believe that there are two possible explanations according to the evidence they have collected. Detective J. Parker of the Paris FBI made a statement: “ We hope that the young girl has simply become lost and is hiding somewhere in the city.” However, another line of enquiry which has been alluded to is be that Alma has been abducted.

Speaking to the BBC, Detective J. Parker disclosed, “We do not wish to harm the community but it is vital that all residents remain vigilant until we have established what has happened to Alma Croissant.” Many fear this statement, keeping their children supervised until further notice. The parents of Alma criticise the police for not trying hard enough to find her. The couple are thirsty for answers and explanations about where Alma could be. Their neighbours say that they think the police are hiding something from them, something linked with Alma...

Understandably, shock has rippled through the neighbourhood. The police have suggested all parents to be on their guard f at this time. If you have any information about Alma Croissant then please contact 07889543525 or visit our website. “We are certain that we will find our little angel, wherever she is.”